NYT Is Threatening My Safety By Revealing My Real Name, So I Am Deleting The Blog by Scott Alexander
Sunday July 12th, 2020 at 7:28 AM

So, I kind of deleted the blog. Sorry. Here’s my explanation.

Last week I talked to a New York Times technology reporter who was planning to write a story on Slate Star Codex. He told me it would be a mostly positive piece about how we were an interesting gathering place for people in tech, and how we were ahead of the curve on some aspects of the coronavirus situation. It probably would have been a very nice article.

Unfortunately, he told me he had discovered my real name and would reveal it in the article, ie doxx me. “Scott Alexander” is my real first and middle name, but I’ve tried to keep my last name secret. I haven’t always done great at this, but I’ve done better than “have it get printed in the New York Times“.

I have a lot of reasons for staying pseudonymous. First, I’m a psychiatrist, and psychiatrists are kind of obsessive about preventing their patients from knowing anything about who they are outside of work. You can read more about this in this Scientific American article – and remember that the last psychiatrist blogger to get doxxed abandoned his blog too. I am not one of the big sticklers on this, but I’m more of a stickler than “let the New York Times tell my patients where they can find my personal blog”. I think it’s plausible that if I became a national news figure under my real name, my patients – who run the gamut from far-left to far-right – wouldn’t be able to engage with me in a normal therapeutic way. I also worry that my clinic would decide I am more of a liability than an asset and let me go, which would leave hundreds of patients in a dangerous situation as we tried to transition their care.

The second reason is more prosaic: some people want to kill me or ruin my life, and I would prefer not to make it too easy. I’ve received various death threats. I had someone on an anti-psychiatry subreddit put out a bounty for any information that could take me down (the mods deleted the post quickly, which I am grateful for). I’ve had dissatisfied blog readers call my work pretending to be dissatisfied patients in order to get me fired. And I recently learned that someone on SSC got SWATted in a way that they link to using their real name on the blog. I live with ten housemates including a three-year-old and an infant, and I would prefer this not happen to me or to them. Although I realize I accept some risk of this just by writing a blog with imperfect anonymity, getting doxxed on national news would take it to another level.

When I expressed these fears to the reporter, he said that it was New York Times policy to include real names, and he couldn’t change that.

After considering my options, I decided on the one you see now. If there’s no blog, there’s no story. Or at least the story will have to include some discussion of NYT’s strategy of doxxing random bloggers for clicks.

I want to make it clear that I’m not saying I believe I’m above news coverage, or that people shouldn’t be allowed to express their opinion of my blog. If someone wants to write a hit piece about me, whatever, that’s life. If someone thinks I am so egregious that I don’t deserve the mask of anonymity, then I guess they have to name me, the same way they name criminals and terrorists. This wasn’t that. By all indications, this was just going to be a nice piece saying I got some things about coronavirus right early on. Getting punished for my crimes would at least be predictable, but I am not willing to be punished for my virtues.

I’m not sure what happens next. In my ideal world, the New York Times realizes they screwed up, promises not to use my real name in the article, and promises to rethink their strategy of doxxing random bloggers for clicks. Then I put the blog back up (of course I backed it up! I’m not a monster!) and we forget this ever happened.

Otherwise, I’m going to lie low for a while and see what happens. Maybe all my fears are totally overblown and nothing happens and I feel dumb. Maybe I get fired and keeping my job stops mattering. I’m not sure. I’d feel stupid if I caused the amount of ruckus this will probably cause and then caved and reopened immediately. But I would also be surprised if I never came back. We’ll see.

I’ve gotten an amazing amount of support the past few days as this situation played out. You don’t need to send me more – message very much received. I love all of you so much. I realize I am making your lives harder by taking the blog down. At some point I’ll figure out a way to make it up to you.

In the meantime, you can still use the r/slatestarcodex subreddit for sober non-political discussion, the not-officially-affiliated-with-us r/themotte subreddit for crazy heated political debate, and the SSC Discord server for whatever it is people do on Discord. Also, my biggest regret is I won’t get to blog about Gwern’s work with GPT-3, so go over and check it out.

There’s a SUBSCRIBE BY EMAIL button on the right – put your name there if you want to know if the blog restarts or something else interesting happens. I’ll make sure all relevant updates make it onto the subreddit, so watch that space.

(please be polite – I don’t know if Ms. Tam was personally involved in this decision, and whoever is stuck answering feedback forms definitely wasn’t. Remember that you are representing me and the SSC community, and I will be very sad if you are a jerk to anybody. Please just explain the situation and ask them to stop doxxing random bloggers for clicks. If you are some sort of important tech person who the New York Times technology section might want to maintain good relations with, mention that.)

If you are a journalist who is willing to respect my desire for pseudonymity, I’m interested in talking to you about this situation (though I prefer communicating through text, not phone). My email is scott@slatestarcodex.com.

[EDIT: I am now over capacity for interview requests. Feel free to send more if you want, but I may not answer, sorry.]

Thanks NYT. Guess giving alt-right assholes a platform for the sake of both-sidesism wasn't enough for you.

matthiasgoergens
Huh? Complaining about alt-right in such terms seems hardly compatible with slatestarcodex norms of discourse.

jlvanderzwan
Couldn't resist the "so much for the tolerant left"-bait, could you? 1) the whole point was that on SSC the discussions would be good faith with both parties looking to be challenged in their views, which is in no way similar to what the NYT did and 2) this is not the slate star codex, this is my shared feed and I do not at all pretend to be a safe space for that so if you don't like that then don't follow me.

matthiasgoergens
What do you mean by shared feed? Yours was a public comment. I never followed you. Also what do you mean by 'both parties'? Are you referring to US politics? What does that have to do with anything? (And from what I can tell, the typical slate star codex 'grey tribe' attitude is barely not represented in American politics at all in any of their parties. But I don't know much enough about their broken system to tell.) What's a 'tolerant left'? Is that a specific subtype of left wing politics? 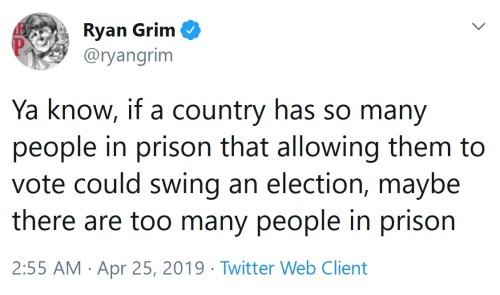 You guys are dangerously close to realizing specifically what kinds of people they keep from voting and why.

I want to drill this into everybody’s head:

Not so fun Fact: Southern states that reliably vote for Republicans also have the highest prison population in the United States. (source). So mass incarceration is a double whammy. It’s both a form of voter suppression and a tool to strengthen white people’s political power.

to whom it WILL concern